The science behind
skin pigmentation

The science behind skin pigmentation

The skin has epidermal units that are responsible for melanin production and distribution, a process called melanogenesis. These units are composed of a melanocyte surrounded by keratinocytes and regulated by a closed paracrine system. Melanin is the primary determinant of skin, hair, and eye colour. And plays a critical role in photo protection due to its ability to absorb ultraviolet radiation (UVR). The Fitzpatrick system is the most commonly used system to distinguish different skin pigmentation phenotypes. It characterizes six phototypes (I-VI) by grading erythema and acquired pigmentation after exposure to UVR. Constitutive pigmentation reflects the genetically determined level of melanin and can be changed by several regulatory factors. These factors may be intrinsic (released by keratinocytes and fibroblasts, endocrine, inflammatory and neuronal cells) or extrinsic (UVR and drugs).

There are several dermatoses associated with pigmentation defects which can be congenital or acquired, permanent or temporary, systemic or skin-restricted. Since these dermatoses have an important impact on patient quality of life and their treatment can be unsatisfactory, pharmaceutical and cosmetic industries have been continuously seeking new solutions. The identification and comprehension of the melanogenesis mechanism facilitate the understanding of the pathogenesis of pigmentation disorders and the development of potential therapeutic options.

Melanogenesis is a complex chemical reaction that is part of the skin barrier defence systems. The light absorption of melanin leads to photoreceptor shielding, thermoregulation, photo protection. Melanins are also powerful cation chelators and may act as free radical sinks.

Melanogenic gene expression is controlled by a complex network involving transcription factors and other intracellular signalling pathways. Genetic, biochemical and pharmacological evidence has established that signalling from pro-opiomelanocortin peptides (POMC), alpha-melanocyte stimulating hormone (α-MSH) and adrenocorticotropic hormone (ACTH) through the c-AMP pathway, play a dictating role in melanocyte differentiation and in the regulation of the melanogenesis.

This pathway begins with POMC produced by the pituitary gland and epidermal keratinocytes and cleaved in α-MSH. The α-MSH functions as do all hormones, by adhering to specific transmembrane protein coupled receptor called – type -1 α-MSH Receptor (MC1R) – on nearby melanocytes.

By binding to MC1R the α-MSH stimulates the α-sub-unit of stimulatory G protein. The latter activates adelylate cyclase, increasing intracellular c-AMP level. Increased level of c-AMP acts as a second messenger to activate protein kinase A (PKA), that penetrates the nucleus of the melanocyte and activates the transcription factor c-AMP Response Element Binding Protein (CREB) which finally induces the expression of the Mircrophtalmia Transcription Factor (MITF).

MITF is a “master regulator” of melanocyte function and melanogenesis. It governs the expression of a large number of genes involved in the melanocyte survival, differentiation, mobility and melanin production including the Tyrosinase (TYP) and other related melanogenic enzymes Dopachrome Tautomerase (DCT) and Tyrosinase-Related Protein 1 and 2 (TYRP1, TYRP2).

To become functional proteins these melanogenic enzymes will undergo a maturation process through the Golgi apparatus, protein processing, covalent modifications, chaperone binding, oligomerization, and trafficking. These melanogenic enzymes travel via the secretory pathway and early endosomal intermediates. From there, they are delivered to preformed stage II melanosomes, where they initiate pigment synthesis and further maturation.

Within the melanosome, pigment granules of melanin are synthesized from the amino acid tyrosine which is converts into L-Dopa and Dopa quinone through the actions of the enzyme tyrosinase, Additional enzymes including Dopachrome Tautomerase and Tyrosinase-Related Protein 1 convert DOPAquinone into other intermediate products. Two different eumelanin pigments, which differ in colour and solubility, are formed from the further oxidation of these various compounds. Alternatively, the availability of cysteine or glutathione causes DOPAquinone to be converted into phaeomelanin. The mixed ratio of the two pigments, eumelanin and phaeomelanin, determine final skin colour.

Mature melanosome (stage IV) filled with melanin pigments are then transported along the dendrites. The molecular mechanisms of intracellular melanosome transport between the perinuclear region and dendrite tips is a microtubule based transport system combined with motor protein kinesin and dynein dependent on c-AMP intracellular concentration. The capture at the tip of the dendrite is followed by the transfer to the neighbouring keratinocytes is not yet fully understood.

The increased scientific knowledge in the melanogenic pathway with the identification of key biological markers provide nunii Laboratoire with the opportunity to target not only the tyrosinase but the entire biochemical cascade by a genuine combination of depigmenting agents to obtain a safer and more effective treatment to combat skin hyperpigmentation. 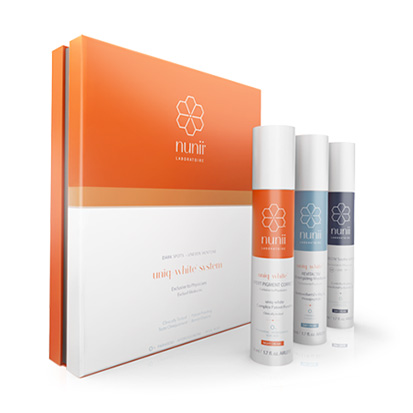